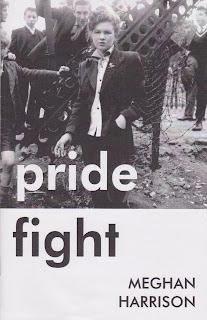 We’ve all been there. That dark cubby hole above the local pub or the small recess at the back of a mostly charmless café. Hunched over the microphone or circling it in suspicion: the performance poet, by turns moaning or shouting their disdain for the audience or past lovers. They’re cheeky, wear too much retro punk and menace for my taste, but display enormous energy, linguistic verve and biting humor. A case in point: Meghan Harrison’s poem in Pride Fight whose opening line is its title:

I know it’s the economy
but I want
what everybody wants:
enough money
to stop worrying about money
and a beautiful man
on his knees.

Eavesdropping in on someone’s unhappiness over a lover is not always very interesting - except where the prevailing metaphor is a surprising one; in this instance, the alienation stirring within capitalist economics: “Naïve and wire-stripped I wanted/to fuck you in those fields/ but you’ve already/commodified your experience/of fucking someone else in a field.” Love has product value only when you’re a determined onetime buyer, get first dibs and when a kind of a justice prevails: “I’m trying not to imagine/the suffering of whoever/made the clothes that/I’m imagining us taking off.”  Poetic form itself can’t escape the anti-capitalist gloss:

The pastoral
is a construction site,
the late-shift workers' radios
burr the air with
the stacked purring
of someone else’s money.

In all you have to like Harrison’s competence in things like internal rhyme, sustained metaphor, and the kind of skeptical, even cynical energy (not always a bad thing) she brings to her poems. If I have reservations, it’s that these and other qualities tend to flag through the rest of the chapbook. Keep an eye (and ear) open for this poet, though. She’s a winner. 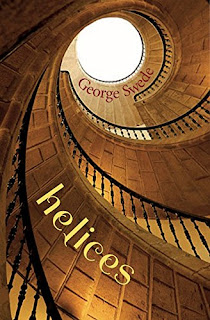 Many will find George Swede’s newest collection hard not to like – if only because haiku and other similar forms are almost guaranteed an immediate allegiance for being short, pithy and sweet. I’m less easily won over by the form than I am by the content in Helices. Like David Zieroth, Swede possesses both the knowledge and courage to tackle tough subjects.

self-scrutiny
as deep
as the snorkel
allows

a grain of sand
in my umbilicus
the theory of everything

between what
I think and what is
pink flamingo

Swede’s poems gain by the deep typographical space between lines (not possible here because of my own limited space). Unlike many poets, Swede also has the capacity to present bare images that do more than squat on the page and dare you not to like them. Just being an image is not enough. You have to feel a crackle between it and everything else surrounding and intermixing with it - through the poet’s use of diction, syntactic placement and attention to sound. Here’s the opening of “Rhapsody”

As the wind sways the tops of the trees, a sudden
urge to break free from the gnarled knuckles
and knees, the sunken skin, the exposed blood
vessels.

in the camouflage
of beached driftwood
bones from the sea
I don’t often comment on packaging but I will here. At 4” X 6.5” the book’s densely packed pages fit nicely into the back pocket. I’d like to see others do the same, but I’d urge people to buy or rummage through the library for Swede’s poems themselves - taut, authoritative little poems that occasionally come with a smile. 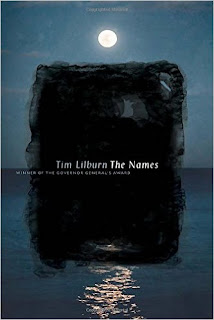 Okay, I admit it. I’ve been a little hard on Tim Lilburn. Lilburn long ago took a gamble on the reader’s attention by exercising his penchant for ontological speculation. Very bright, very caring poets I know say Lilburn is impenetrable either because they don’t share his passion for the hermeneutical musings on divine presence by 13th century theologian John Duns Scotus or because he has yet to provide us, implicitly or explicitly, a strategy for unpacking the chthonic, subterranean thickets he perp walks us through. I know because I’ve asked.

What Lilburn has done in his latest collection is lower his sights a bit to trade in prejudices shared by a broad swath of Canadian poets. The most overworked of these is the notion that otherwise nondescript members of one’s family have something to tell us about what it means to be completely human. Says Paddy Lilburn “The government is bad so we live here/Half dug into a cliff of The End of Things/Precipice of crowbelly cloud and Serbian wolves.”

Hughie of wounds
Four or five years after the war, mortal shrapnel; they’d
Called his brother, my father, out of the lines in Italy
To consider what stirred in the pillow’s cup;
Hughie and Ita, a beautiful TB-ed London woman, they moved
To Vancouver in `46, then back to Liverpool, had a son named (I think)
Pat, still likely there if not himself dead.

Lilburn is not above working another common bias: that a poem to be good should end declaratively, running counter to my experience that most personal discoveries in life and literature are incremental rather than epiphanal. Thing is, Lilburn does it so well.

In Normandy, Holland or any southeast Saskatchewan bar, heart,
Truck gliding into a ditch north of Corning, 1971,
Wheat delivered, licence renewed, beautiful,
Beautiful, their heavy-wind-in-poplar speeches,
Their sweeping movements in my half-lit, plush underage theatre; how they
Bent my breath.

Few poets have benefited from as small and specialized a readership as Lilburn. His critical acolytes too often engage in what R.P. Blackmur once described as “flag waving”. It reminds you “what you ought to feel” - or where Lilburn is concerned, what you are expected to think or know. What is rare, or perhaps overlooked, is the movement of Lilburn’s heart as well as his head. As it is revealed above. More please.
Posted by David Godkin at 8:34 AM