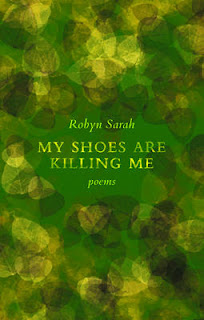 
Robyn Sarah once wrote “A good poem always knows more about itself than even its author does. If parts of it seem baffling, the cue is not to be afraid, but to ask the poem what they mean.” What parts of Sarah's poems in My Shoes Are Killing Me mean cannot be considered separately from her larger themes of time and memory and her habitual insistence upon the Now: to feel the weight of each moment in her life and to convert this into poetry so that readers feels it in theirs. These include historical moments felt by many Canadians over their radios in “The Dominion Observatory Time Signal (`The beginning of the long dash following ten seconds of silence’).” More compelling are softer, less ironic moments, “the last/unevaporated dewdrop in the grass/among the little shaggy heads of clover” and, of course, Sarah’s moments with her favourite people:

children outside in pajamas
in the endless twilights
parents on the front stoops
calling door to door, one to another
time of no hurry – a life of moments
we didn’t cherish enough.

Moments with children are what we most often like about Sarah’s poems. Missing from this collection are regrets that sometimes emerge alongside her solicitude for children, notably those in her oft-cited poem “Maintenance.” Intriguingly present are sharper feelings of rebellion against the inescapable indenture ordinary things have upon our lives: Sarah's reverence for children may remain intact, her salutary vision of things does not; joy in the everyday is disrupted, windy trees, canopies filled with birds and “garage sales all up and down the block” producing instead a “homesickness… for the days/when all this mattered, for the way it mattered.” By this Sarah signals an even more extraordinary shift away from her usual complaints about a retreating natural world, pushing aside “the end of summer’s endlessness,” for something larger, more unsettling, and as insidious as a snake.

a movement
in the corner of the eye
of something dappled and sinuous, fleeting,
cornucopia of smells wafting in
through the summer screen door,
and something was missing now
from what used to be enough,
when did we first notice
it wasn’t enough?

What is missing from what used to be enough but no longer is? And who are the “we” who once enjoyed what had been enough but who failed to see it was not? For all our familiarity with Sarah’s themes of summer ending, the wasting aspects of time and of death, we're cut adrift from questions like these. “We seem to have left,” she writes, “all familiar ground”

That’s the limb
I happen to be out on – the blue man
in the green world, who when asked
by the green man what he was doing there,
replied, “Me? I’m from another story."

“Another story” reinforces an emerging theme of something missing in the stories Sarah’s poems used to whisper in her ear, the “cue” to its baffling nature interpolated with other “familiar ground” routinely tilled: time and memory, now spread up against the backdrop of the artist’s own declining time, “It was the beginning of knowing/we were running out of days”:

As I've suggested above, it’s hard not to consider questions of what is “missing” or “enough” without reflecting upon a central concern Sarah shares with other poets: their sense of time and the diminishing opportunities to fill time with a sufficiently meaningful and fully developed body of work able to withstand time. The ultimate litmus test is how well the poet’s sensibility has been trained on the full scope of life so that it can be contained in her work and always within sight of what is most telling about the poet and reader’s shared experience, that which is most human. In other words, that which, by any one’s estimation, should be more than enough. But is it? Has Sarah hit on something beyond the blueness of the blue man?

We never really find out. The book reinforces Sarah’s reputation as one of the finest lyric poets this country has ever produced and yet her unwillingness to exploit this very compelling thread is what’s missing from the book itself, reducing the poems to unquestionably well-crafted mood pieces, when so much more might be achieved by following that thread to deeper, fresher truths. Instead, the shift away from the normal bucolic quality of her work towards an area of thought she plainly might pursue but chooses not to, renders the book’s overall achievement incomplete.

It’s an impression that only deepens as Sarah pursues another area of thought which she also abandons and with which she concludes her book - the poem “Belief,” containing Sarah’s ambivalent philosophical stance on free agency. “Two mysteries” pertain, she writes: “a dry, curled leaf boat…pushed to and fro by imperceptible stirrings of the air” and “a single leaf, nodding and nodding as if by its own volition, on an otherwise motionless tree.” “More than a word,” she finishes, “I would as lief be/one of these leaves,” suggesting a re-evaluation of what it means to be someone who uses words, a potential repudiation of language in favour of greater existential certainty - and a final inability to choose. Too often poetry is what we do when we can’t make up our minds about the world.

Perhaps she's afraid to cross the threshold - only to discover a supreme fiction ..

Ok. I get that. I finished reading Notes Towards a Supreme Fiction" and I think you’re right. There is a fundamental separation between the world and what we make of it. In our poetry, language, in our conceptualizations and mythologies. My take anyway.

Si. Only our imagination can make anything of the phenomenal world.