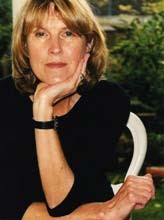 Hester Knibbe has enjoyed increasing attention from European and American readers as the author of two books of poems in her native Dutch: Oogsteen (2009) and Bedrieglijke dagen (2008), both from De Arbeiderspers. Rather than wait for her first book of poems in English, I thought I’d offer a taste in the translated poem below, a wonderful achievement in 12 lines. Next week, I’ll follow up with an interview with Hester and her translator, Jacquelyn Pope.

They lay under thin black ice

one gone blue, the other grey.

I laid them out on grass

that snapped under my step

wrung their bodies warm and dry

gave them the gust of my breath.

Then I looked out at the morning

that lay lukewarm on the water

put on a tank top

arranged some grasses in a vase

fished two children out of sleep.

What a beautifully poem. I loved it and am going to look for more from Hester Knibbe.